A new update has been released for PodPledge today! This update expands on several features, and adds some new goodies as well. Here's what's new:

A list of the pledges and merchandise sales that your projects generate has always been available within your Account Area. But project owners have also requested a more "proactive" report, so they don't miss anything. That's why we've added a daily Project Performance Report. Starting today, a daily report will be generated for each project that received pledges and/or merchandise sales the previous day.

The report summarizes the number of pledges, merch sales, and Incentives that were earned, including links to view each of those items in more detail within your Account Area. The daily report is posted in your account's "Messages" mailbox. When a new report is generated, the previous ones are removed, so that your Messages mailbox won't become cluttered with performance reports.

The daily report can also be received by email. The emailed version of the report can be turned on and off in the "My Settings" section of your Account Area on the website.

The "My Pledges" section of your Account Area has been improved. It is now easier to scan the list of projects that you have supported, it lists how far away you are from earning each project's next incentive, and there is a button to a new and improved Pledge Manager page. 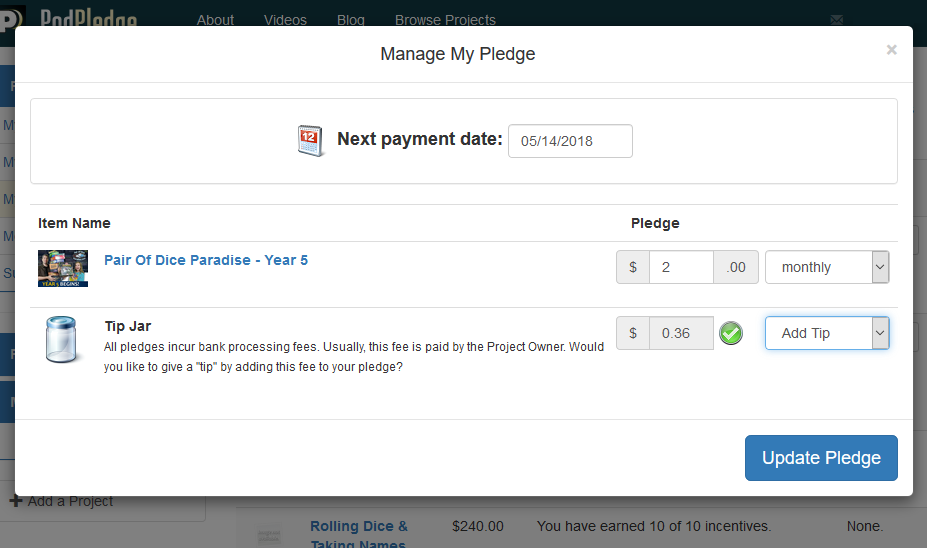 On the Pledge Manager page, you can change the value and frequency of a recurring pledge that you are making to a project. You can also edit the date that your next pledge will be automatically processed. This can be very useful if you support multiple projects and wish to consolidate the date on which they are processed; or need to postpone a pledge for whatever reason, but don't want to cancel it entirely. Also, the Tip Jar additional payment can be added or removed from your pledge at your discretion.

These updates are already in place on the website, and ready to use. There's more updates in development, so watch for more exciting new features and improvements in the days to come. In the meantime, we hope these updates help you to Stay Inspired!