Today we are releasing a software update for PodPledge! This update includes several new additions that we're very excited about. Most of these things were suggested by media makers who have been setting up new projects of their own. So, if you have a question or suggestion, let us know so we can consider it for a future software update!

More Options For Funding Goals
Projects can now be set to have multiple types of funding goals. A project can either be working towards a grand total (this was the previous option), or towards a monthly goal (new), or even no funding goal at all (new). The selected Funding Goal will automatically be displayed on the project's webpage.

Project owners can control how a project's earnings is displayed on its webpage. The project page can now display either the total raised (this was the previous option), its estimated monthly revenue (new), or even both (new). The next item has more information about this...

Accepting Recurring And One-Time Payments
There's been some confusion about whether projects can accept recurring subscription payments. Yes, you can! And to help communicate this to your supporters, we've added more options for project owners to control how their project's earnings and funding target are displayed throughout the website. Here's an example of some of the ways a campaign's funding information could be displayed on their project's home page. 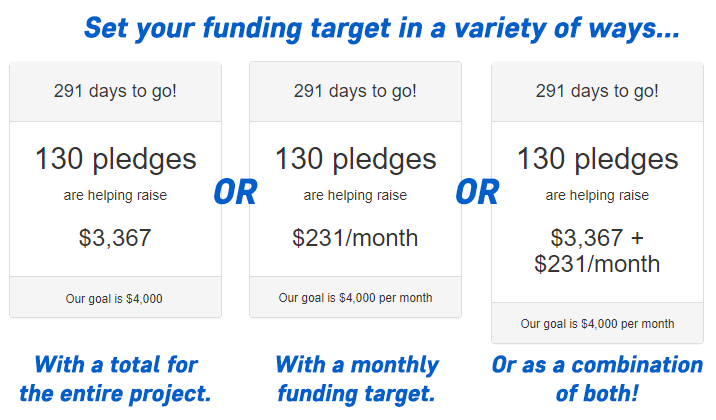 Tip Jar
If you would like your supporters to have the option of chipping in to pay the payment processing fees associated with their pledges, we added the ability for to add a "Tip Jar" to your project's pledge page. This provides your supporters with the option to add this extra amount to their pledges. And if you don't want to use it, the Tip Jar can also be turned off, which will remove from that project's pledge page.

Early Access Content For Supporters
Early access can be a great way to allow your supporters to preview videos or podcast episodes before they go public.

Project updates that are posted on the project's webpage now support "early release" options. If you want your supporters who have earned certain Incentive rewards to receive early access to a project update, you can now do this. You can also optionally specify a date on which the website update will be unlocked and become accessible to everyone who views the page.

Similarly, project update emails now support "staggered delivery". This allows the email to be delivered to certain supporters right now, and then to all your other supporters on a later date.

An example of pre-releasing a website update and email to just those supporters who have earned specific Incentives: 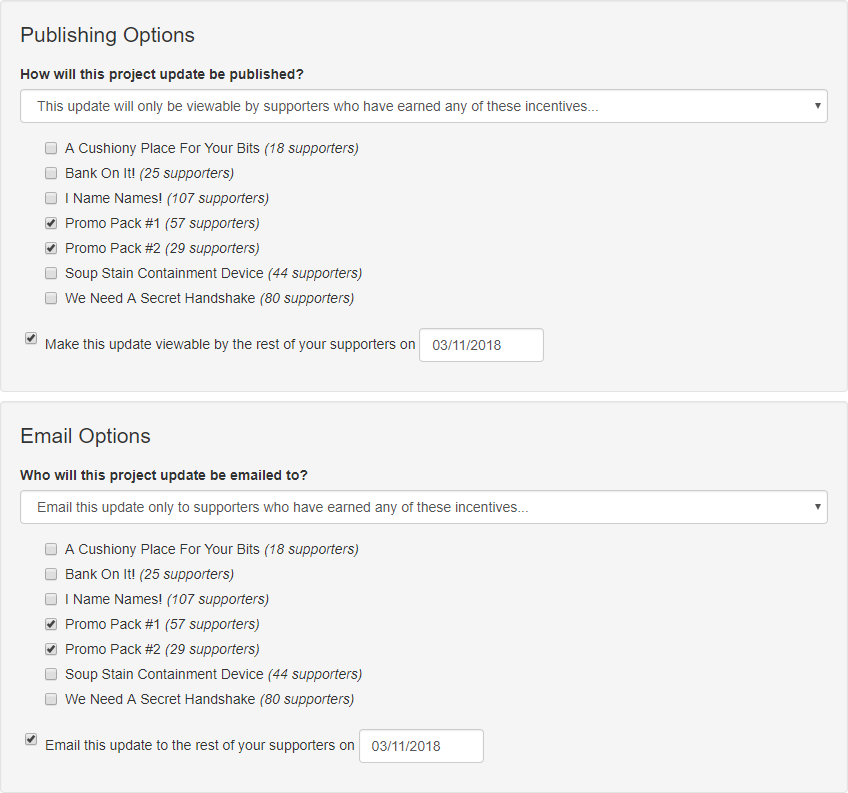 Additional Updates
The following items are also included in this update: