By Chaz Marler | In the category of Board Games

This season of this project ended on November 26th, 2016.

This project continues with another season as: Pair Of Dice Paradise - Season 4

The playmats have arrived!

The playmats earned by those who have supported the fundraiser at the "A Mat Made In Heaven" level have arrived! They'll start shipping today!

And I must say that InkedPlaymats did a fantastic job. The print quality on the mat is great, and I received them within 48 hours of providing them with my artwork. Their turnaround time was crazy-fast!

Please note, that the playmats, like all new mats made of this mouse pad-like material, will have a distinct odor when they first arrive. The smell will dissipate after they air out for a while.

Thanks again to everyone who has been supporting Pair Of Dice Paradise. Your support is what helps keep the channel going and growing. More videos and updates will be coming soon!

Season 3 Playmat Design!
The design for the Season 3 playmat for Pair Of Dice Paradise supporters has been finalized, and is now going to press. The design is based on the opening titles of the "Team V.E.S.T." video series that co-stars Marty Connell from the Rolling Dice & Taking Names Gaming Podcast. This was one of my favorite video series to produce last year. 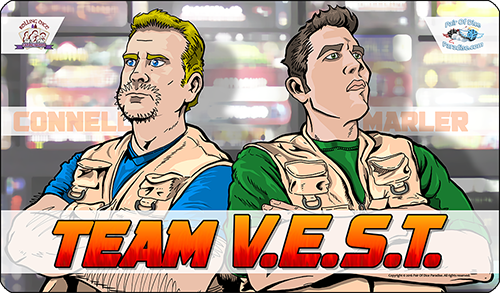 The playmats will be printed by InkedPlaymats.com, and a copy of one will be shipped out to everyone who has supported Pair Of Dice Paradise's S3 fundraiser this year at the "A Mat Made In Heaven" reward level. The Season 3 fundraiser is wrapping up, but there's still time to get in on it before it's gone.

Thanks to everyone for your support. More updates to come soon!
-Chaz

Playmat Production!
Now that convention season and the Top 100 video series for The Dice Tower are finished, the next project I am focusing on is wrapping up the remaining rewards from the Season 3 fundraiser and then prepping the Season 4 one.

The first draft sketch of a portion of the playmat for the "A Mat Made In Heaven" reward level has been completed. Based on this sketch, can you guess what Dynamic Duo* the playmat's illustration is going to feature? 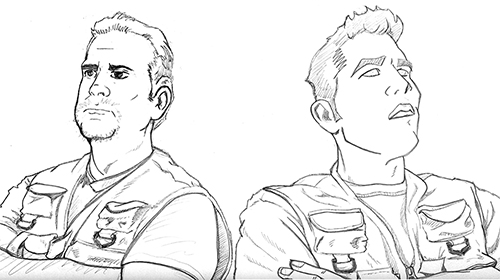 (*Dimwitted Duo would also have been accepted.)

More updates will be posted as the playmat's illustration is completed and sent to press. There's some interesting opportunities on the horizon for the year to come, and, with your help, Pair Of Dice Paradise will be able to pursue them. So, thanks to everyone who is supporting PoDP. None of this would be possible without your support!

Chaz Marler
@Murr: Exactamundo! More images to come as the design is completed. :)
6 years ago

Murr Rockstroh
I'm going to guess Marty & Chaz
Want to join the discussion? Log in to leave a comment.
7 years ago

The embroidered patches for the Pair Of Dice Paradise Season 3 fundraiser arrived today, and they have been mailed out by USPS to all the backers who have reached the "Sew Good" reward level!

Watch your mailbox, and enjoy! 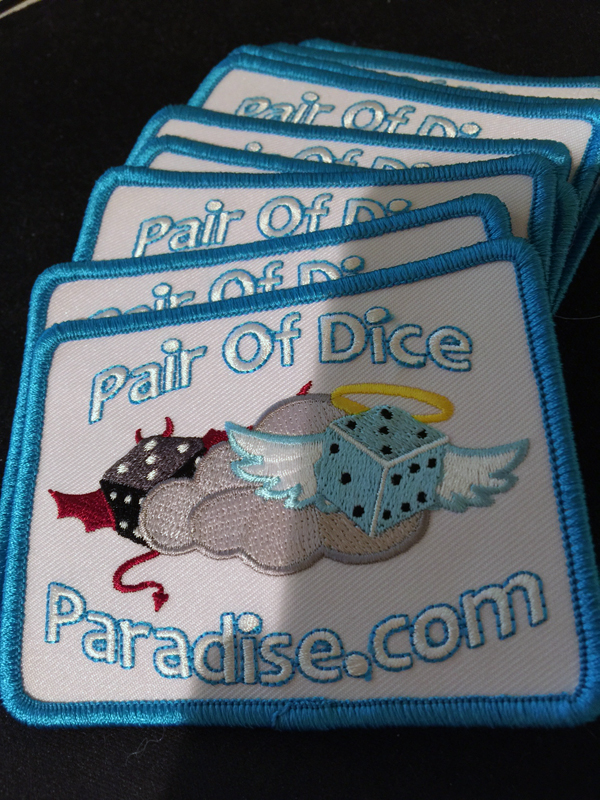 The patches for the "Sew Good" reward level are on their way!

The patches will be a nine-color embroidered pattern, measuring 3x4 inches. They will also have a heat seal backing, which makes them "iron on" patches.

Here's an example of how they turned out: 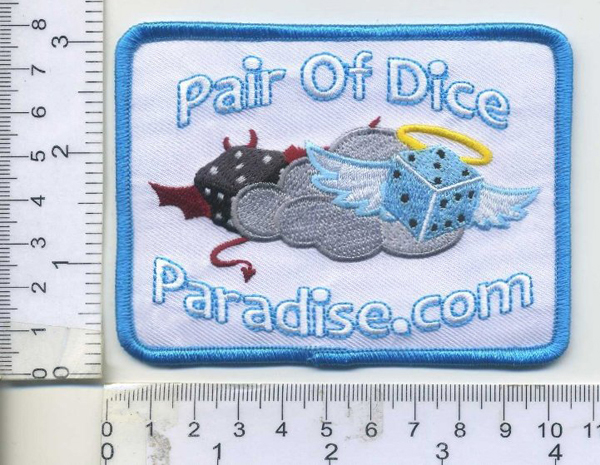 What's next?
Now that the patches are on their way, the next incentive I'll be setting my sights on completing is the custom artwork for the playmat from the "A Mat Made In Heaven" reward level. More details on the development of the playmats will be posted throughout February.

Thanks to everyone who has supported the Pair Of Dice Paradise fundraiser. More updates to come!

Update on the patches for the "Sew Good" reward level!

The design for the embroidered patch for the "Sew Good" reward level has been finalized and approved to begin production! The patches will be a nine-color embroidered pattern, measuring 3x4 inches. They will also have a heat seal backing, which makes them "iron on" patches.

Here's a sample of the final patch design: 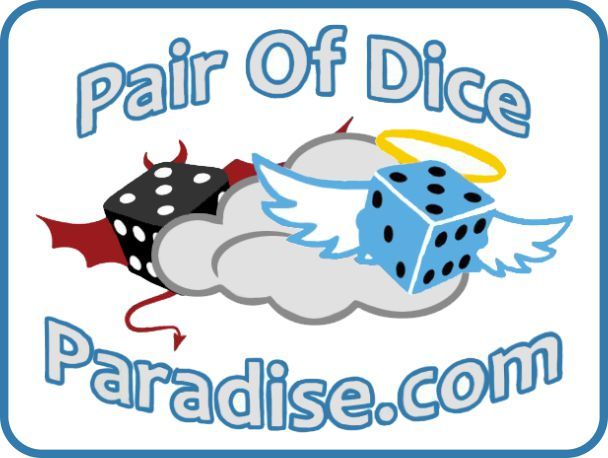 What's next?
Now that the artwork has been approved, a fully embroidered sample patch will be produced for me to do a final review on. That will take an estimated 2-3 business days to produce. Upon my approval of the test patch, the printing company will begin producing the rest of them. It will likely take a couple weeks for me to receive the finished patches. Once I do, I'll be set up and ready to turn them right around and ship them out to the supporters that have earned this incentive reward. In the meantime, I'll keep you posted with any more news or updates that become available.

Thanks to everyone who has supported the Pair Of Dice Paradise fundraiser. Your support has made possible some of the really really neat things that are coming in 2016. Stay tuned...

Hello, everyone!
Chaz Marler here with news about a package that recently arrived, containing one of the incentive rewards for our Season 3 fundraiser!

The package contained the coins for the "To Coin A Phrase" pledge level! 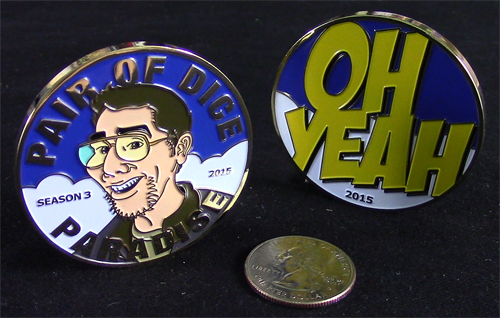 Now, the coins actually arrived shortly before BGGcon a few weeks ago, and anyone who reached the $80 pledge level prior prior to BGGcon (November 17th) should already have received their coin. The coins for those who have reached that pledge level since BGGcon are having their coins shipped out this week.

If you have not received your coin by November 20th, please contact me at pairofdiceparadise.com/contact and I will get a replacement coin sent out to you ASAP.

And if you have pledged less than the $80 level, but would like one of these coins, then I have news for you that is so excellent that you'll want to call up your college roommate and gloat! (That will teach you to steal my clock radio, Kevin.)

Pledges to the fundraiser are cumulative. For example, if someone previously pledged $50, then they could pledge an additional $30 now and the value of their pledges would be combined to a total of $80 - unlocking the $80 "To Coin A Phrase" pledge level.

Those with a subscription pledge (such as pledging $10 a month) will eventually unlock this pledge level too, as soon as the total value of the pledges they have made to the fundraiser reaches the incentive's value.

Coming up next: The patches for the "Sew Good!" reward will be going to press soon. And, I'm scheduling time in January to start recording videos to answer the questions received for the "Question Everything? Really?" reward. So far, I've only received ONE person's question. So, if you were one of the six lucky people to pledge early enough to earn that reward, now's the time to get your question to me!

Thanks to everyone for your support of Pair Of Dice Paradise!

It's November! For like three days now!
Today, all those who have earned the "We Need A Secret Handshake" fundraiser incentive should receive an invitation to join the Exclusive, Members-Only Pair Of Dice Paradise Super Hush-Hush Facebook Group. (Or EMOSHHFG for short... well, for shorter.)

The invitations will be sent out using Facebook's built-in invitation system. So, keep an eye out on your Facebook page for an alert, direct message, or whatever method Facebook is using to send out group invitations these days.

If you have earned the "We Need A Secret Handshake" fundraiser incentive, but don't receive your invitation within the next 24 hours, let me know and I will resend it. You can always get a message to me using the Pair Of Dice Paradise website's contact page.

Thanks to everyone for supporting Pair Of Dice Paradise, and I'll talk to you again soon. Perhaps even super exclusively in our hush-hush members-only group. That's fancy!

This is a private update, viewable only by supporters that have earned at least one of the following incentives: . (Posted 7 years ago)

I recently posted a challenge that, once @DiceParadise reached 3,000 Twitter followers, I would make a video showing what lies behind the big, blue, cloud backdrop. Well, once the challenge was made, we plowed right passed 3K followers. And so, as promised, in this special bonus video, I reveal the mystery of what strange, wonderful thing is beyond the backdrop. Enjoy!

Hello!
Chaz Marler from Pair Of Dice Paradise here, with an update to our Season 3 fundraiser. First off, zounds abounds! You guys out there in supporter-land raised 20% of the campaign's target in just the first week! So, to everyone who has contributed so far, I want to say thank you for helping get PoDP S3 off to a great start. And as a small token of my gratitude, I promise never to try and artificially make our third season sound hip by referring to it as PoDP S3 ever again.

First off, an update to the $25 "Wear It Like A Badge" incentive reward. Those who pledge $25 or more to the fundraiser are eligible to receive 8 GeekGold from me on the Board Game Geek website, which they can then use to obtain the official Pair Of Dice Paradise microbadge. Yes, show off your love for Pair Of Dice Paradise with our hand-crafted microbadge! Or, just say you're going to, and go buy the "I Drank Paint" badge else instead. It's okay. I won't judge you.

When the campaign launched, I had enough GeekGold to award this incentive to the first 30 people who earned it. Well, after the fundraiser launched, two Board Game Geek user's, Mike and Nikolas, surprised me with generous donations of GeekGold, effectively doubling the number of microbadges I could afford to give out. So, that means that now this incentive will be earned by the first SIXTY supporters who donate $25 or more to PoDP S... ... Pair Of Dice Paradise Season Three. So, a huge bonus thanks of gratitude goes out to Mike and Nikolas for their additional support! I really appreciate it!

And for the last item for this update, I wanted to mention a little challenge that's currently going on over on Pair Of Dice Paradise's Twitter page at @DiceParadise. We're super-close gaining our three-thousandth Twitter follower. To celebrate, I wanted to do something special. So, have you ever wondered what's behind this big blue backdrop? Well, when we reach 3K subscribers, I'll produce a Frank little video in which I'll reveal the mystery of what's behind it. So, that's fun. ... Unless you don't care, in which case I have nothing to Crow about.

And there you go! That's all fundraiser news for now. I'll have another update for everyone in a few days, as soon as a certain package arrives. In the meantime, thank you for helping support and spread the word about this our PodPledge fundraiser campaign for PoDP S... ... our next season.