This is a private update, viewable only by supporters that have earned at least one of the following incentives: Level 1, Level 2, Level 3. (Posted 4 years ago)

This is a private update, viewable only by supporters that have earned the following incentive: Level 2. (Posted 4 years ago)

This is a private update, viewable only by supporters that have earned at least one of the following incentives: Level 2, Level 3. (Posted 4 years ago)

This is a private update, viewable only by supporters that have earned the following incentive: Level 2. (Posted 5 years ago)

One of our stretch goals was that if we reached 150 total number of pledges the Brothers Murph would record a striptease.  To be honest we didn't really think we'd ever reach that number.

You have no one to blame but yourselves.

SHERYL OLSZEWSKI
Sneaky. Bump up the number then cancel the whole thing? Scoff! Balderdash!
5 years ago

Loved meeting all of you at DTC 2018 and look forward to seeing ya at GenCon soon! I'll bring my kazoo!
Want to join the discussion? Log in to leave a comment.

This is a private update, viewable only by supporters that have earned the following incentive: Level 3. (Posted 5 years ago)

This is a private update, viewable only by supporters that have earned the following incentive: Level 1. (Posted 5 years ago)

Matthew Jude
Project Update #1 | This Game is Broken - Some thanks, some details, and some logistics.

Well… that went better than we expected!

First of all Dave, Mike, Nick, Matthew, Gary and I would like to thank everyone for their incredibly kind and generous donations. We are very grateful for the support people have shown us, and are very excited about what this means to us and the show. Not just financially, but in terms of confirming that This Game is Broken is something that people really value.

We’re a small podcast, although we are growing, but the support and encouragement we’ve received from listeners is almost overwhelming. There is no way we could ever say thank you enough - but thank you.

Secondly I’d like to just give a bit more detail about what we’ll be spending the money on.

One of the primary reasons for launching this crowdfunding campaign was so that we could pay Matthew for the incredible amount of work he puts into each episode. While This Game is Broken may sound like it’s a sprawling mess from a bunch of gibbering idiots - there is actually a immense amount of work that goes on in the background in order to make it.

The editing of an episode of This Game is Broken is an incredibly time consuming and skilled process. It’s not just sticking all 4 different audio tracks together (or 6 if we have guests) - although that would be time consuming in itself. It’s about making sure the episode flows well and is punchy, that everyone can be heard, that the timing of jokes is not thrown off by lag and the fact we record in 4 different locations and 3 different time zones. It’s about making decisions about which jokes worked and which didn’t. It’s about having the technical expertise to use the editing software to the best of it’s potential.

The editing is a job that none of us could do as well as Matthew does. And it’s something we believe is absolutely essential to the show. Without this incredibly high standard of editing it is questionable wether the podcast would be worth doing at all. The editing is also a process that takes a huge amount of time to do. Matthew spends 10+ hours and episode editing the show - even more if it’s a guest episode. And that’s on top of the regular large amount of effort, energy and time that each and every one of us puts into preparing for and recording the podcast itself.

Matthew has never asked to be paid for this work, but we as a group we feel that he deserves to be. And that’s why we’ve decided that 40% of all PodPledge money will go to directly to him.

Another person who puts a lot of time, effort and skill into the show is our secretive sixth member, Gary King.Gary is an incredibly talented artist and designer, and a fully fledged and equal member of the team. While his contributions don’t have a direct impact on the podcast as a raw audio product the benefits of having him on board are immeasurable. The graphics he produces for us give us a sheen and air of professionalism that we probably don’t really deserve. And the ability for us to ask him to do graphics to support whatever crackpot scheme we’ve impulsively decided to do (eg the This Scale is Broken video series) is incredibly invaluable.

Also, you should see what he has planned for the UK Games Expo Live show!

We could never afford to pay Gary the going market price for the work he does. We’d have likely have already racked up thousands of pounds worth of bills. But he’s going to get 40% of all the profits from the T-Shirt and merchandise sales from Threadless (which considering that all but one of the designs on there are by him anyway is actually very generous on his part).

So that leaves 60% of the PodPledge funds and 60% of the Threadless funds left over. This money will be going in a pot that will be used for any new equipment we may need and also as a way of subsidising travel and accommodation to conventions in order that we can all get together in the same place at the same time (and maybe do some live shows).

We would like to get Nick and Mike over to the UK in 2019 for the Games Expo, and Dave, Matthew, Gary, and myself over to a US convention in 2019 as well. There are six of us to split the money between - and so it’s unlikely to fund everything. But none of us work in particularly well paying jobs and so the subsidisation will make the difference between these sorts of things being impossible to being very possible indeed.

Thirdly I’d like to mention rewards. The response to the PodPledge campaign has been much greater than we anticipated. Particularly the one off donations. This is not a problem at all (obviously), but does leave us in a position where we have more rewards to fill than we first anticipated.

We are very excited to have “live audience” members join us for the recordings. And there is no issue at all in fulfilling that. However we want to make it a positive experience for all concerned and feel that it would be sensible for us to have no more than 3-4 “audience” members per show (so that we can chat with everyone more easily if nothing else). This may mean that there may be a bit of a wait until you get your turn to sit in - but you’ll still get the opportunity to sit in on at least two shows as a reward for a cumulative donation between April 2018 and April 2019 of $40 or more.

We plan on starting inviting audience members into the recordings around the middle of May. 99% of the time we record on Sundays at 8pm UK time, 9pm Germany time and 12 noon LA time. We’re unlikely to be able to change those times to suit audience members unfortunately as we all have various commitments and that’s pretty much the only time we can get together.

We've started putting the names of everyone who donated to us on our supporter's page here: https://thisgameisbrokenpodcast.com/support/. We're going to be refreshing it weekly so if your name isn't there now it soon will be.

And finally, I’d like to take this opportunity to thank Mike, Dave, Matthew, Gary and Nick for joining me in this adventure. I could not have wished for a bunch of funnier, more creative, supportive, generous and kind friends. Every single one of them brings something unique and valuable to the podcast - and I struggle to imagine doing it without a single one of them.

In short - these guys are pretty damn special.

I think that’s it. Sorry for the long message. Once again thank you to absolutely everyone who has donated to our show. It means a great deal to us and we are very touched by your warmth and kindness.And as always, the other fantastic way to support the show is to be our evangelists. We would really love to grow our podcast. It feels a little egotistical to say but we honestly believe we’ve struck on something special here - both with our format and with our mix of people. And we’d like to share that with as many people as possible.

So, if you see a forum post or something on Facebook, reddit, or twitter asking for recommendations for podcasts or board game media then if you could point people in our direction that would be incredibly useful to us. Even if people have already mentioned us it never hurts to join the chorus. A podcast can only do some much to promote themselves and the rest generally has to be word of mouth. We’d love it if you could help with that.

Again, thank you so much.

Dan Hughes
This Game is Broken 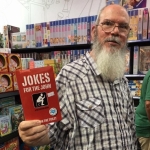 John McDonnell
Thank you everyone for all the hard work you do. I always look forward to every episode. I always share the episodes to the limited community I interact with here in Brisbane. Hopefully that grows in time as I use a cattle prod with more vigour!
Want to join the discussion? Log in to leave a comment.
8 total results.